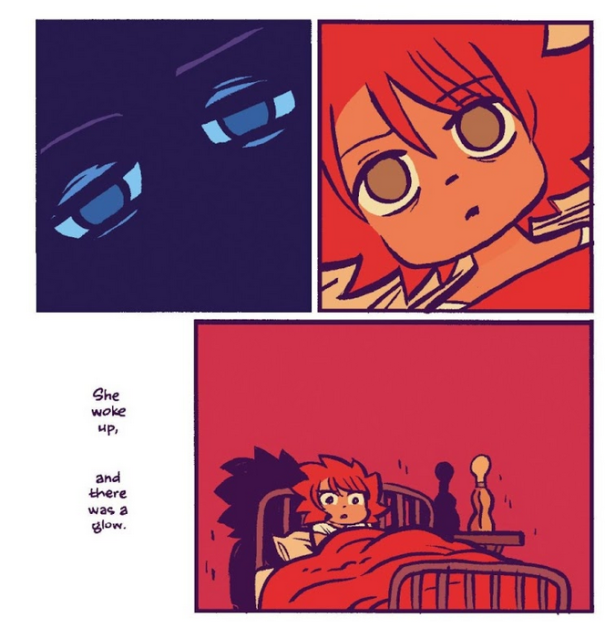 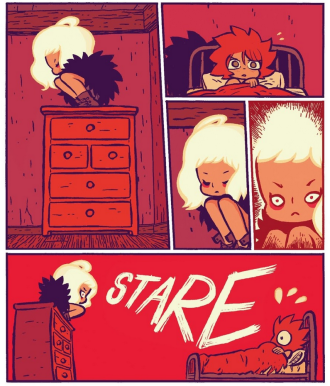 This is the first page in Brian Lee O’Malley’s 2014 graphic novel, “Seconds.” The protagonist, Katie, groggily opens her eyes and stares at the ceiling for a moment, disoriented, before realizing that something strange is going on. You can see the first sparks of awareness slowly building into curiosity and alarm, as both she and the reader realize that something out of the ordinary is happening. Then you turn the page, and find a small, unusual looking girl squatting on her dresser. There is no dialogue, only the exchange of panicked expressions as these two notice each other for the first time.

As the author of the Scott Pilgrim series, this isn’t the first time that O’Malley has played with disorientation, confusion and distraction in the perspectives of his characters. He likes the unreliable narrator because he can use them to show us how we lie to ourselves and how our perspectives are often distorted when we are tired, drunk, ashamed or simply not paying attention. We all see ourselves as the narrators of our own stories and many of us “self edit,” either choosing to look at the choices we’ve made from a perspective that makes us look good, or else punishing ourselves by blowing mistakes out of proportion.

Check out these two scenes from Scott Pilgrim. The first is from Volume 2, “Scott Pilgrim Vs. The World.” 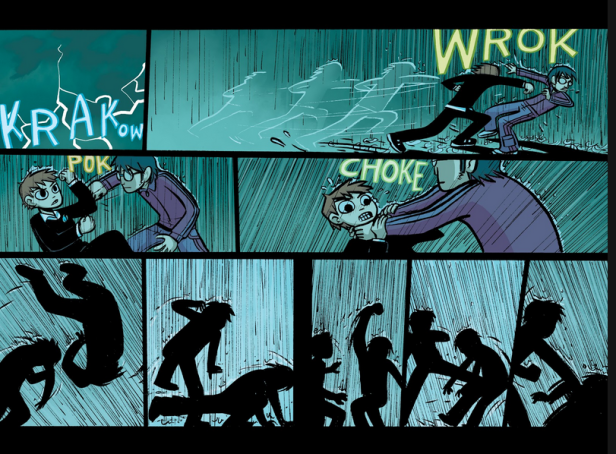 This depicts the way Scott remembers battling Simon Lee, a villainous boy from a rival school who had kidnapped Scott’s then friend, Kim Pine, and held her hostage. Now compare it to the way Kim tells the same story in Volume 6, “Scott Pilgrim’s Finest Hour.” 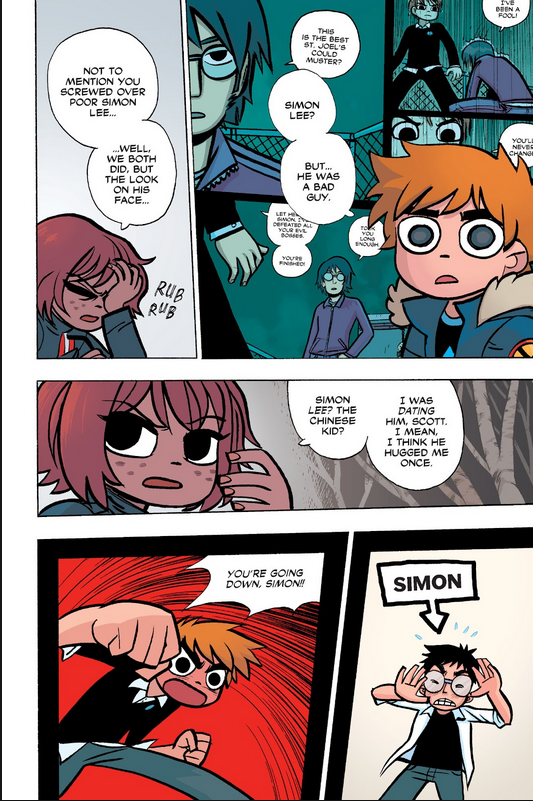 Simon wasn’t the villain Scott wanted him to be. He was actually Kim’s boyfriend at the time and hadn’t done anything wrong. Scott was the aggressor. He then rewrote the story in his mind in order to cast himself as the hero. He needed to be able to think in these terms in order to cope with the guilt because at his core, Scott doesn’t want to be a bad person.

“Seconds” takes this kind of narrative introspection in a slightly different direction however. Instead of focusing on guilt as the main aspect of Katie’s “self editing,” it focuses on regret. That might seem like splitting hairs since guilt can be considered a form of regret, but it’s kind of like how all pinkies are fingers, but not all fingers are pinkies. Katie’s life is a tangled web of missed opportunities, mistakes, and a general sense that she doesn’t feel like she’s living up to her own potential.

Then she’s confronted with something that we’ve all wished for at one point or another, the opportunity for a “re-do.”

At this point I’m going to stop and let everyone know that there are going to be some spoilers ahead. I’m going to try my best to avoid anything that I feel would ruin the story, but you should stop reading now if you haven’t read “Seconds” and want to go into it with a completely blank slate.

So here’s a brief overview of the premise. 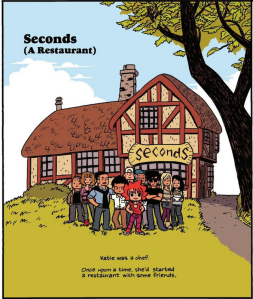 Katie and a group of friends opened a restaurant called “Seconds” a few years before the story begins. She was the Chef and her food put Seconds on the map, but she wasn’t one of the owners, so it was never really hers. Now she’s finally purchased her dream location, an old rundown building that she plans to convert into a new restaurant and rebrand 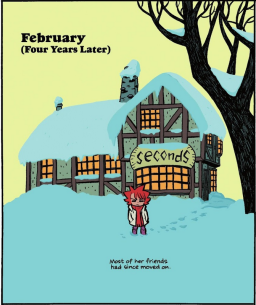 “Katie’s.”  She’s very excited about her new place, but the renovations keep taking longer and costing more than she’d originally anticipated. This leaves Katie in an awkward sort of limbo between major career shifts. On the one hand, her new place isn’t open yet and so she can’t start working on her new menu or serving customers. On the other, she’s already trained the new Chef to replace her at Seconds, so she doesn’t really have a place in the world.

This is also reflected in how Katie feels about her age.

For a lot of Millennials, our 20s are viewed as a sort of proto-adulthood. It’s a time of experimentation, where it’s OK to not feel like you know you’re life-path. It’s OK to rent a tiny apartment, stay in bed streaming television on your days off and dress like you’re in high school. It’s ok to still call your parents for help with simple things every once in a while, like not knowing how to fix a clogged sink or pay an electric bill. It’s OK to be working a job that pays your rent with a little left over to buy video games or to break up with a long term romantic partner and see what else is out there. You don’t need to have everything together yet. You have time. 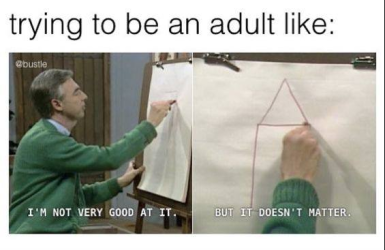 30 is a different animal.

I’m not saying this is true at all. Lord knows everyone’s circumstances are different. It takes some of us a lot longer than others to discover our purpose in the world, and still others never do. Arbitrary age limits like this don’t really mean anything, but there is a social pressure that says when you hit the big 3-0, this is where you’re supposed to be a real, honest-to-god, adult now. 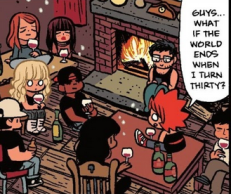 Katie denies it, but this sort of terminal anxiety is at the heart of her character. She’s terrified of the incoming change, terrified of the passage of time and fixated on her regrets of everything that brought her to this point. 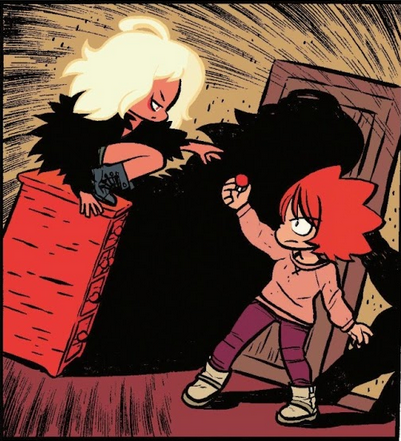 Lis is a house spirit, the embodiment of Seconds, and everything that has ever happened there. (Think Ghost of Christmas Past meets Fairy Godmother.)  When an accident happens in the kitchen, Lis offers Katie a mushroom that will allow her to re-write one of her past mistakes, giving her a second chance. (Seconds! Get it?) This works out well enough, with only some mild side effects, but then Katie uncovers a whole bunch of the mushrooms growing in Seconds’ basement. Despite Lis’s warnings, Katie proceeds to go back and rewrite bigger and bigger events in her own past, trying to perfect her present, but the more she goes back, the more things start to change in unexpected ways.

I won’t go into the details, but the story illustrates brilliantly how doing things differently will still result in just as many unexpected consequences as the way we did them the first time, sometimes causing new problems and new mistakes that you couldn’t have anticipated. It shows us how spending too much time and energy reflecting on how we got to where we are can be detrimental to crafting our future.

You can learn from your past and grow,  but only if you accept your mistakes for what they are… a part of you.

None of this even touches on the adorable and energetically drawn panels, the thoughtfully crafted and deeply expressive characters or the hilariously written dialogue. I could honestly write three or four more blogs just as long as this one on all the other things that make this book great.

In case you couldn’t guess by now, I heartily recommend you give this story a try. It’s cute, funny, smart, thoughtful and nearly every other positive adjective that I’m not clever enough to list without a thesaurus. It’s also considerably shorter than the Scott Pilgrim series at only one volume, so it’s a great way for you to dip your toe into O’Malley’s work if you’re looking to give it a shot, but aren’t sure if you want to commit to starting a six volume series.

This is also a new format for my blog, so I’d appreciate any feedback on whether you’d like to see more of these kinds of reviews in the future.

Thanks for reading everyone,

One thought on “Seconds: Re-Writing the Past”

This is where you can read original works of fiction and updates by Cody D. Campbell.