So I’ve been thinking a lot about advertising in non-physical media lately. Nobody really likes advertisements (except during the super bowl for some weird reason) and it seems like if you ask people whether or not they want advertisements in their movies, TV shows, podcasts, internet videos, ect., an overwhelming majority of people will probably say no.

Don’t get me wrong. I don’t like them either. There’s nothing like an Axe Body Spray commercial trying to tell me all I need in order to be drowning in women is a can of their middle school skunk juice to really take me out of my viewing experience. They can’t mace you if you mace yourself first!

But there are times when I understand why advertisements are necessary. Radio was probably the first great example. No one pays for radio, but people wanted to be able to tune in and here music, talk shows and news. Sure, there were some hobbyists who were willing to broadcast for free, but income was (and is.. that’s right, radio is still a thing!) necessary for most stations. Equipment, facilities and talent all cost money. So how do you make money when no one is paying for your service?

And that’s a pretty fair deal. You get free media, and in exchange, you spend some of your time listening to businesses that financed said media so you don’t have to. You can crank the Stones, or Kelly Clarkson (or whatever the hell kids are into these days) and then suffer through a brief message from Crazy Willy’s no-down, low-low APR car loans before going back to your morning commute jams.

I personally love a good podcast. One of my favorites, a Dungeons and Dragons podcast called The Adventure Zone, has a commercial break in the center of every episode that I happily listen through, knowing that it’s financing a product that I’m not paying for. Similarly, YouTube ads can help pay content producers on all those cat videos and swimsuit fails you watch for free.

TV started out with a similar set up, but that changed with the advent of cable. They offered more channels and clearer reception in exchange for a subscription, but the commercials didn’t go anywhere. You were now paying the cable company directly AND viewing ads.

To be fair, this was initially an optional upgrade and the cable companies didn’t necessarily pay the networks that were producing the content, so in a way you were paying in two separate ways for two separate services.

The problem is that once people got used to this system, it opened up the gateway to a whole bunch of other services. You might buy a movie ticket and be forced to sit through ads before getting to see the film (reminder, Coka-Cola asks you to please silence your phone) or you might be paying for a streaming service like Hulu and still have to sit through ads. In both of these instances, you are paying twice. Hulu tries to justify this by arguing that they do this in order to offer a discounted service and gives you the option to pay extra for less or no ads, but it still feels like your paying to watch advertisements and that’s never a good feeling.

This gets even more insidious with Final Fantasy XV.

In the game you play Noctis, the leader of a group of four young men on a road trip to save the world… or something. You ride in a car that was replicated by Audi in conjunction with the games release, regularly stop to make camp using Coleman brand tents, stoves, chairs, cutlery and mugs, the American Express logo appears in business windows within the game, all of the characters clothes were designed and are sold IRL by a Japanese fashion label called Roen… and then there’s the worst offender. Those of you who’ve already played the game know exactly what I’m talking about. 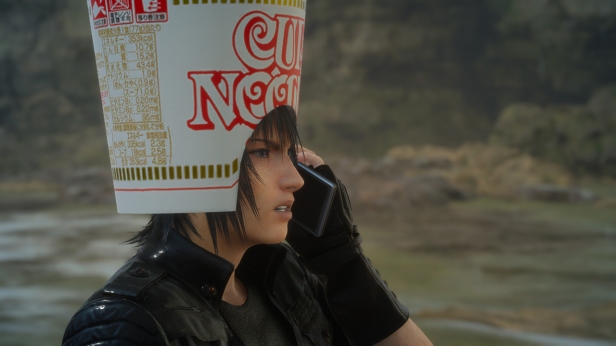 These little bastards are all over this game. There are billboards for them. There’s a truck that sells them as a consumable item on the boardwalk. Noctis, the prince of a warring nation and solemn hero of your journey, can get a hat (as part of a free DLC) shaped like a Styrofoam cup with the branding printed boldly across its front. But this is probably the most egregious offender of all.

Now, there were a lot of people who this didn’t bother. It seemed relatively harmless and even funny at times. Memes spread across the internet like lazily Photoshopped wildfire.

But the problem is that Square Enix didn’t put these products in your game to be funny or because they thought they flushed out the story. The ads did the opposite. Every time these products appeared on screen, they were instantly emersion breaking. They immediately took me out of the story and the fantasy world that the writers had worked so hard to produce and made me very aware that I was being sold something.

That pissed me off because I’d already bought something. THE GAME!

I’d spent $60 of my own hard earned dollar bills on a plastic disk, not knowing that I was going to spend the next ~100 hours in a fantasy world with real world ads. Square Enix is not a struggling company trying to find a way to finance their product. They are one of the largest video game publishers on the planet. This is nothing more than unadulterated corporate greed, steamed in a disposable cup.

But I acknowledge that my experience doesn’t reflect everyone’s. As I said before, many were unbothered or even amused by the company selling their soul to shrimp flavored capitalism. Other games have implemented product placement in the past, Final Fantasy XV is just the most shameless example. Still though, you have to admit that this could prove problematic going forward.

The more we get used to this sort of thing, the more we’re going to see it.

And where does it end? E-books have been on the rise for years. Many believe that they will eventually come to completely replace print. After all, they take up less space, cost almost nothing to produce and don’t require any third party sellers, storage or shipping.

Maybe I’m just paranoid. Maybe books are safe and Ray Bradbury can continue to rest peacefully. I just feel like we shouldn’t take this sort of thing lightly. Companies will continue to worm ads anywhere they think we will tolerate them, so it’s up to us to decide where we draw that line.

Square Enix is about to release the first of three parts in the Final Fantasy VII Remake. Something I’ve been waiting six years for. It’s one of the single most influential stories of my childhood. Buying them new, I will already be paying $180 USD for a video game. If Cloud’s Motorcycle is made by Honda, they will have lost a life-long customer.

Thanks for reading everyone. Let me know your thoughts in the comments,

PS: My analysis blogs will probably be more writing and script focused in the future. This is just something that’s been bothering me.

This is where you can read media reviews, original works of fiction and writing updates by Cody D. Campbell.